The official transition to summer occurred at the solstice in June. The longest day of the year in the northern hemisphere is past and the duration of daily sunlight begins to decrease day by day. True to the Shakers and their Village, this time of year means summer maintenance and preparing for winter months by harvesting food for all – livestock and people. Today, arriving visitors saw large rolls of recently harvested hay dotting the pasture. The process to produce the rolls requires a few days and optimal weather. Grasses are cut and the hay lays in the sun to dry. Then it’s rolled into compact packages and covered to preserve the hay for winter. Soon it will be gathered and transported to storage as feed for the livestock through long dark winters. 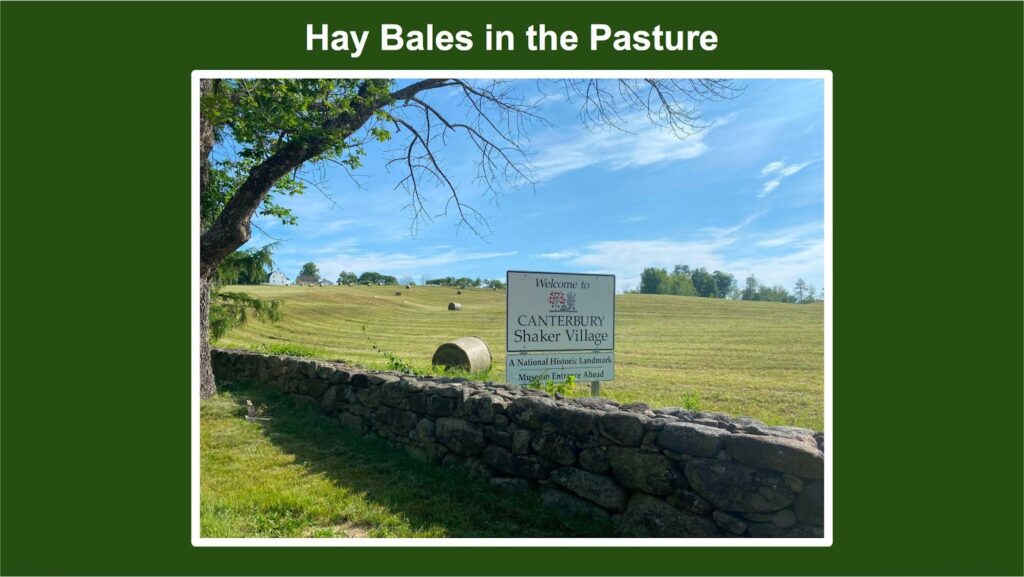 Our group totaled nine today: a combination of Stewards, Master Gardeners and volunteers. We gathered in the parking lot and talked about the heat, humidity and carrying extra water. Our tools included weed cutters, power saws, pruners, loppers and human energy. The agreed plan was to continue work along the Turning Mill Pond pasture wall to reveal the Shaker rock wall to the nearest corner. The weed cutters would be used to widen and expose trails around the pond where volunteers would be able to cut invasives from sluiceways and walls. Insect repellents were applied, water bottles were added to packs and the teams headed toward the agreed meeting point.

The walk to the pasture winds through the Village toward the orchard and down to the Turning Mill Pond. Approaching the orchard, we noted a significant transformation in and around each tree dotting the orchard’s hills. Our request for mowing had been granted! A herd of hungry cows were allowed through the orchard fence to feast on its tall grasses and invasive plants. Cows are not particular with their grazing habits and the changes in the orchard reflected satisfaction with the selection of plants available for their feast. The cows’ ability to walk and chew at the same time helped them cut through the grasses, leaving trails of closely cropped grass and other invasive plants along the orchard floor. We were quick to remind each other not to slip on the products of the bovines’ automatic digestive response to dining out.

The weed trimmer “advance team” walked as our leaders with their tools buzzing at ground level. Small pieces of plants flew into the air and a wide path emerged from their work. We were able to walk two to three abreast as we approached our meeting point. Our list of tasks to be completed were quickly filled by volunteers. Three team members handled weed trimmers to cut away high grasses along official trail paths. They prepared the tools, topped off with fuel and buzzed along and out of sight. Two volunteers, using power saws, discussed their approach to safely cut trees along the rock wall. One departed to the far corner of the pasture and engaged the engine. Soon the thump of tree-hitting-ground was heard. The second volunteer did the same at the closer end of the wall. Another volunteer suggested that we address invasives along the Turning Mill Pond berm, especially along the sluiceway, and departed with tools and water to clip and pull vines from the pristine rock wall. Other volunteers scouted the pasture for a place to stack newly fallen trees in a brush pile. 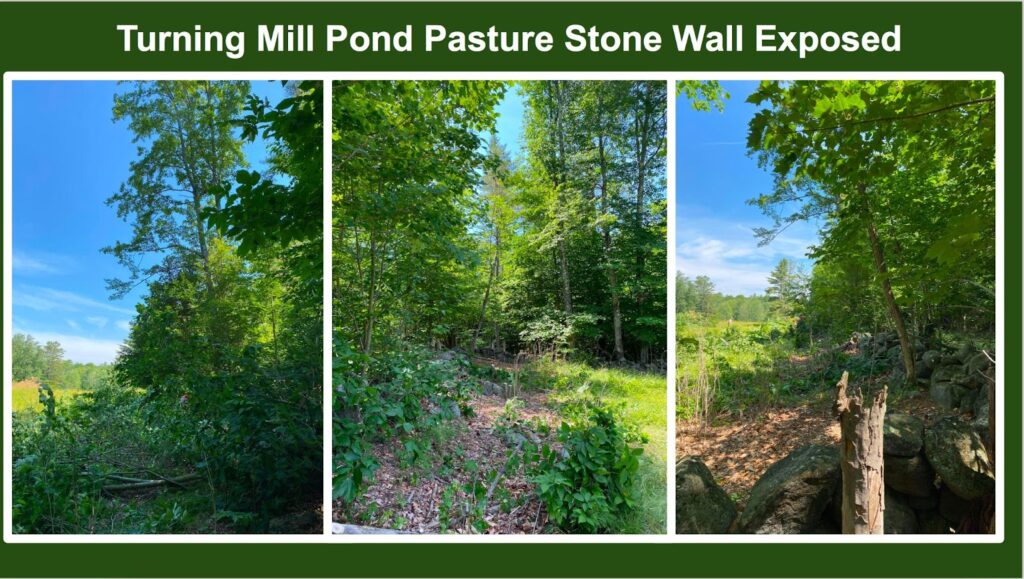 The morning slipped by quickly and we used our stashes of water liberally. We helped each other drag trees to the pile, anchor their trunks in the dirt and push them over to land on top of the pile. We soon had a mound of fresh cut trees, branches and leaves that towered over us. At the end of the session, our completed projects list included a fully trimmed trail, one side of the pasture’s rock wall revealed, free of encroaching forest and one wall of the Turning Mill Pond sluiceway berm cleared of invasive plants. We gathered under a thick canopy of trees and shared stories as we finished our stashes of water. Then tools were packed away and returned to their locations, ready for next week. 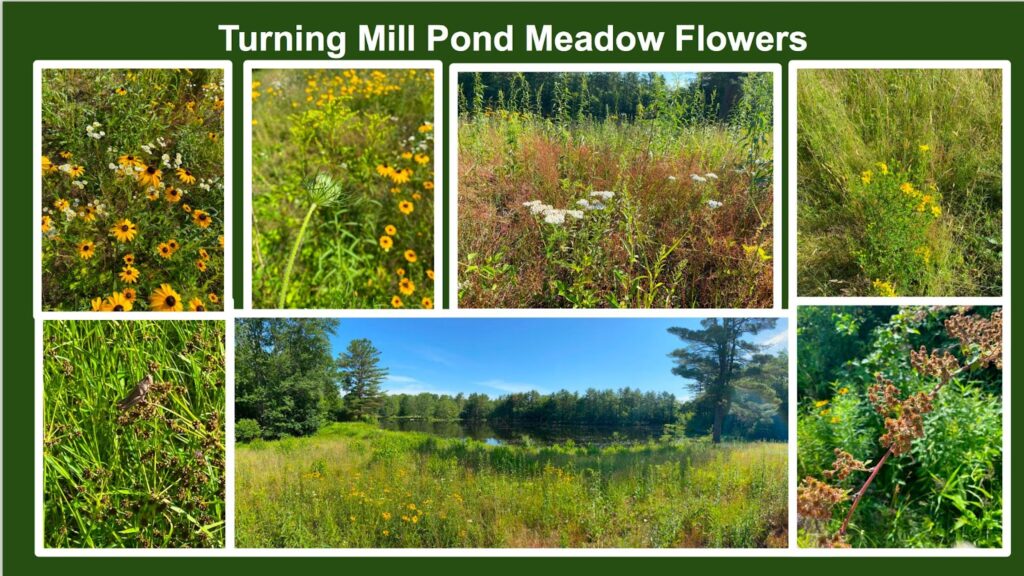 Equipment: Pruning/Garden tools if you have any available.

Format: Meet you in the parking lot to review the day’s projects.

Questions: Send a note to the team